KAI began our response to the Ukraine crisis the week before the war started, in preparation of this eventuality. As a result, Khalsa Aid International was able to respond rapidly to the Ukraine crisis by establishing teams on the borders of the five bordering countries. Within 24 hours we had a team in Poland and within 48 hours in Slovakia, Romania, Hungary and Moldova.

Initially, we had a lot of calls from Indian students who were stuck in Ukraine and trying to flee to the borders. We were also inundated with calls from the students’ parents in India asking for assistance with helping their children flee Ukraine, taking over 1500 calls in the first week alone.

We established contact with restaurant owners, volunteers, and transport companies to see what we could do to assist. Through a local volunteer, we helped provide hot food to the students as they fled.

As KAI was one of the first NGOs to arrive at the Medyka border, our initial operations revolved around arranging transport for the refugees crossing the border. We expanded our operations to include medical aid, shelter and food provision. Within two days we had set up a 24-hour langar  provision, serving hot food (curry and rice, chips) to the refugees as they crossed the border. To the exhausted and hungry refugees, the hot food was a blessing and very much appreciated.

The situation in Ukraine proceeded to deteriorate as the attacks on Ukraine became more intensified. This resulted in an increase in the number of Ukrainian citizens fleeing to the borders to escape Ukraine into the neighbouring countries. With the majority of people crossing into Poland, this resulted in a long wait for the refugees at the border point.

Khalsa Aid International was approached by Caritas to cross the border into Ukraine to provide hot food for the refugees waiting to cross into Poland. Food provision has been further extended to feed the refugees set up in shelters and to feed the other NGO volunteers.

This food provision has continued and we are looking to further expand our aid relief in Poland. We are currently looking to secure a warehouse that will be used as a central European hub to collect aid supplies for distribution in Ukraine


Teams were sent to the borders of these three countries to monitor the need for aid provision. Local authorities are well organised in coping with the influx of Ukrainian refugees and international students. Khalsa aid international liaised with local NGOs to assist with the delivery of food aid, shelter provision and medical first aid assistance at the borders.

In Hungary, we moved our operations and provided assistance in Budapest as there was an influx into the city and the waiting times increased for the refugees wishing to fly out to their countries.

Our initial operation was based at the border of Tiraspol assisting the refugees with food provision, transport and medical assistance. We assisted a family with a 20-day old baby who had escaped from Ukraine return back to their home country.

As this border closed, we moved our operations to Palanca where we continue to provide food aid and transport with the liaison of local NGOs. We have now doubled our provision of food aid at this border. We are further expanding our operations in Moldova by setting up another base in Chisinau to assist with the increasing number of refugees leaving Ukraine as Russia continues to attack in the South.

We continue to monitor the situation on an ongoing basis and have currently decided to expand our Poland and Moldova operations. This is where we feel the greatest refugee need will arise, as the war continues to rage through Ukraine. 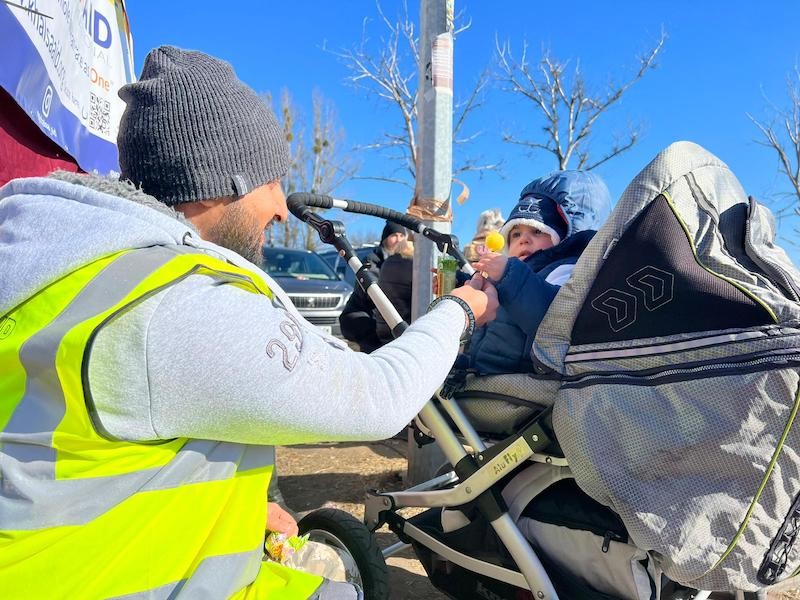